In November 2011 it was decided (in Dutch) that an evaluation would be carried out of the Dutch National Counter Terrorism Strategy between 2011 and 2015. The Research and Documentation Centre (WODC) of the Ministry of Security & Justice in August 2014 published a report (.pdf, in Dutch) plus appendices (.pdf, in Dutch) in preparation of that evaluation, which itself will be carried out at the end of 2015. In February 2015, an official English summary (.pdf) of the preparation was published. Here is that summary in its entirety (~1800 words):

From the 1st of January 2005 onwards, the ‘Nationale Coördinator Terrorismebestrijding’ (National Coordinator for Security and Counterterrorism) is the leading coordinator in the Dutch counterterrorism coordination structure. A multitude of government agencies and organisations are involved in the implementation and execution of the national counterterrorism policy. As the coordinator, the NCTV has a central role between the government actors. The NCTV provides knowledge to executive organisations, links separate sections of policy and sets priorities.

Between 2001 and 2010, the counterterrorism policy was not founded by an overarching strategy. With the ‘Nationale Contraterrorismestrategie 2011-2015’ (National Counterterrorismstrategy 2011- 2015, referred to as ‘CT-strategy’), a comprehensive strategy was established in 2011. This strategy is an integral and coherent approach to terrorism in the period of 2011-2015 and was presented to the House of Representatives in April 2011.

The CT-strategy will be the subject of evaluation for the first time in 2015. This present research is aimed at preparing the evaluation, by contributing to the establishment of an evaluative framework, that can be applied to the evaluation in 2015.

The subject of this research is the National Counterterrorismstrategy 2011-2015 and the policies resulting from this strategy. The central research question is:

The research is divided into three sub-studies.

To answer the central research question, an extensive document study has taken place, which included a detailed analysis of the measures which resulted from the CT-strategy. Next, a series of five interviews with key-figures at the NCTV, eight interviews with persons in involved government organisations and five scientists in the field of counterterrorism have taken place. The research was concluded with two meetings at the NCTV and an expert meeting with scientists, researchers and policy advisors in the field of counterterrorism.

This research aims at and is delineated to policy measures, policy interventions and policy intentions that originated from the CT-strategy, which implementations result from input from the NCTV and are based on written documentation.

The CT-strategy consists of a central aim, five ‘pillars’ and eight strategic priorities. The core idea behind the counterterrorism policy is the ‘brede benadering’ (‘broad approach’). The ‘brede benadering’ consists of five pillars: ‘verwerven’ (obtain), ‘voorkomen’ (prevent), ‘verdedigen’ (defend), ‘voorbereiden’ (prepare) and ‘vervolgen’ (prosecute). The pillar ‘verwerven’ (obtain) is the foundation for the other four pillars, as it obtains information and intelligence about threats. In the CT-strategy, the pillar ‘voorkomen’ (prevent) is considered the main pillar against terrorist threat.

Based on the documentation study, the interviews and our own analysis, the relation between the central goal, the five pillars and the eight strategic priorities is reconstructed in the means-end diagram below [click image to enlarge]. 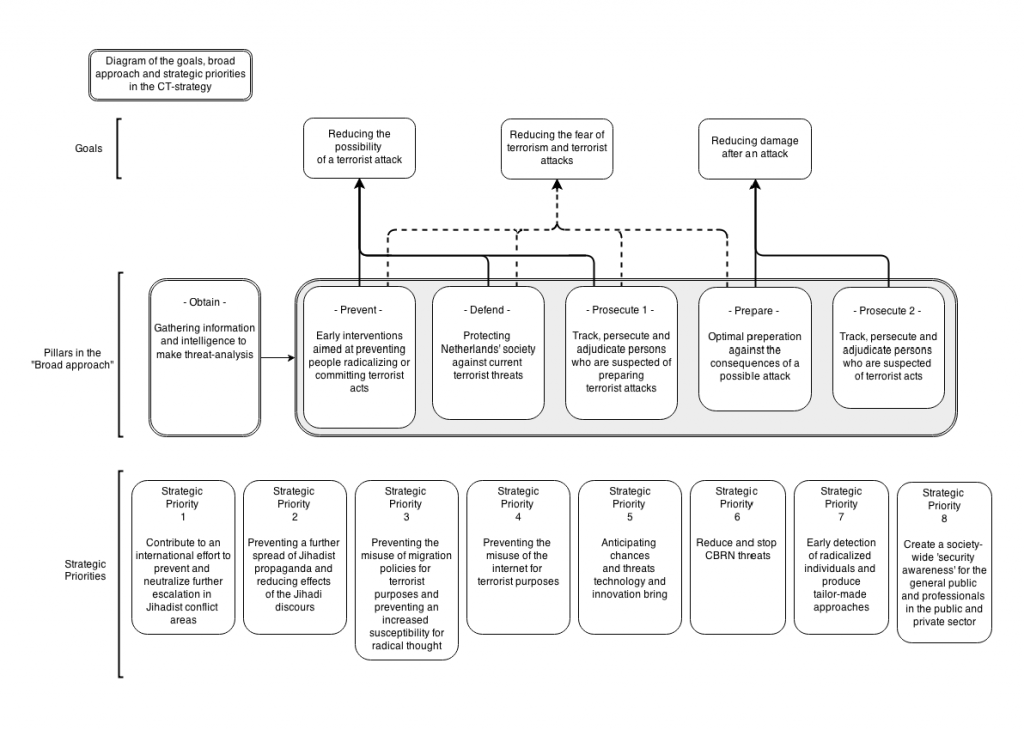 This research describes an extensive and complex policy area, of which the coherence between the various components of the policies do not immediately attest from the strategy. Besides the strategic goals, the CT-strategy also describes executive and operational goals. As a consequence, the perception on counterterrorism (and terrorism) and the implementation and execution of counterterrorism measures are not separated. The counterterrorism policies have a strong focus on performance (or focus on ‘acting on new threats’), which means the focus of the counterterrorism policies are constantly shifting. The focus of policy is not defined strongly in the CT-strategy. This flexibility also has advantages; based on the most recent threat-analysis and specific incidents, a wide range of different policy measures offer a lot of possible approaches to new problems.

Using Pawson and Tilley’s CMO-model of policy analysis [footnote 1: R. Pawson & N. Tilley, Realistic Evaluation, Londen: Sage publications, 1997.], the assumptions on context, interventions and mechanisms are analysed. During the establishment of the CT-strategy (the context in which the strategy was produced), there was no strong terrorist threat in the Netherlands. The focus of counterterrorism policies were determined by new threats, new incidents and the political situation at the time.

Regarding the causes of terrorism, policymakers assume a strong causal relation between different determinants, radicalization and terrorist acts. However, in scientific literature and during the interviews, scientists and policymakers have declared that there is uncertainty regarding the exact workings of radicalization and mechanisms through which radicalisation manifests itself. There are no clear assumptions about the (establishing of) goals of counterterrorism policy in the CT-strategy.

Regarding interventions, the assumptions about the approach, the assumptions about the tasks and relations different government actors have, have been analysed. Assumptions regarding the approach are determined by the central idea behind the Dutch counterterrorism approach – the ‘brede benadering’ (‘broad approach’). Assuming intervening in an early stage of radicalization leads to the biggest chances of success, the main focus in counterterrorism policies is in the pillar ‘voorkomen’ (prevent). The ‘brede benadering’ (‘broad approach’) has narrowed in the last years: preventive measures, aimed directly at (suspected) culprits have become more prominent. Three types of generic interventions are embroiled throughout the entire policy area and are of great significance to the counterterrorism strategy: cooperation, coordination and communication.

Considering the exploratory nature of this research, the specific mechanisms behind the interventions and outcomes of these mechanisms have not been reviewed. However, this study does review literature on (identifying) mechanisms, which has led to an expansion of the CMO-model. Illustrating this expanded CMO-model, the new framework has been applied to two counterterrorism measures: the personal approach (‘de persoonsgerichte aanpak’) and training activities increasing resilience against radical ideas. The expanded framework can be used to identify specific workings and mechanisms of counterterrorism measures in the next evaluation.

This study included a search and review of every (known) public evaluation on every measure, intervention and intention resulting from the CT-strategy. We conclude that the strategic priorities have not been evaluated. A small portion of the measures in the five pillars of the ‘brede benadering’ (‘broad approach’) have been evaluated. Key elements of the counterterrorism policy – the pillar ‘verwerven’ (obtain) and a significant section of the pillar ‘voorkomen’ (prevent) – are barely evaluated; only a few measures within these pillars are evaluated. Examples are several evaluations of the work of intelligence services and several evaluations of the cooperation with other partners. Part of the pillar ‘voorkomen’ (prevent), preventing violent extremism, has been evaluated. In addition, we conclude that available evaluations mostly review the (legal) arrangements and the processing (or functioning) of the measures – and do not review the direct effect and results of the measures on countering terrorism. A significant portion on the available evaluations is aimed at reviewing goals and functioning beyond the field of counterterrorism, like the functioning of the intelligence agencies in general.

The relationship between parts of the CT-strategy, an extensive and complex policy area, is not well described in the strategy itself. Many parts of the strategy concern execution policy. The policy strategy and policy execution are not strictly separated. The precise focus of the counterterrorism policies is constantly shifting, depending on the political context and concrete threats at a certain moment. At this moment, the policy focuses on jihadist (travellers). A big advantage of the strategy is her flexibility. The ‘brede benadering’ (‘broad approach’) and the five pillars offer a wide range of measures; according to the threat level and concrete incidents, measures are chosen. However, as a result of this flexibility and the width of the measures that can be chosen the strategy is not the main factor in determining executive policy. This is more determined by concrete developments of threat.

A multitude of cooperative government actors are involved in counterterrorism policy. Partnerships between actors are both formal and informal. The NCTV has the role of coordinator. The NCTV provides knowledge to executive organisations, links separate sections of policy and sets priorities. The role of the NCTV differs by subject and can be directing, informative or facilitating. This flexible role provides benefits, but sometimes creates ambiguities among the participating actors.

The core idea behind the counterterrorism policy is the ‘brede benadering’ (‘broad approach’). During the interviews, policy makers declared that this ‘brede benadering’ (‘broad approach’) has been narrowed. However, the main pillars against terrorist threat remain ‘verwerven’ (obtain) and ‘voorkomen’ (prevent). The pillars ‘verdedigen’ (defend), ‘voorbereiden’ (prepare) and ‘vervolgen’ (prosecute) are also an essential part of the approach, but are less important as far as policy concerns.

This research aims at preparing the evaluation of the CT-strategy in 2015. In the last chapter of the research report, a contribution to the establishment of an evaluative framework is made. We recommend to evaluate the main themes and topics in the field of counterterrorism, and to further review the key interventions – cooperation, coordination and communication. We suggest that the main research question will be:

“Which contribution provides the CT-strategy to achieve its goals and how do the key interventions work?”

In order to answer the main research question, we recommend to take account of the following themes: