Disclaimer: I have not been educated in public policy or politics.
In Wiki Government (2009), author Beth Simone Noveck discusses how technology can benefit democracy when used for citizen participation, working toward a more open model of decision-making. The Dutch government is currently running a two-year pilot program at www.internetconsultatie.nl in which all ministries (are said to) consult the public about at least 10% of their legislative proposals (I don’t know how they measure the “10%”). Although I highly appreciate this pilot as a step toward a (more) participatory democracy, I hope its successors at the level of both Dutch ministries and Dutch municipalities will make sure to take into account Noveck’s lessons-learned described in chapter 8 (citation):

In addition: could anything be learned from www.derdekamer.net and www.democratiespel.nl ? I’d be very happy to read your comments!

Bill Blunden‘s paper “Manufacturing Consent and Cyberwar” (.pdf), written for the Lockdown 2010 conference, deserves more attention and discussion, IMHO. Obviously referencing “Manufacturing Consent: The Political Economy of the Mass Media” (1988) by Edward S. Herman and Noam Chomsky, Blunden discusses the dangers of “offense is the best defense” crisis mentality, (mis)attribution of attacks and weakly-founded claims about (future) threats by security firms and media; which altogether may resemble the propaganda model after, updating it to the current realm of discourse, one replaces Herman/Chomsky’s “anti-communist” filter with perhaps a more generally apocalyptic “FUD” filter (better suggestions are welcome). The paper is well-written. Its abstract:

Over the past year, there have been numerous pieces that have appeared in the press alluding to the dire consequences of Cyberwar and the near existential threat that it represents to the United States. While these intimations of destruction can seem alarming at first glance, closer scrutiny reveals something else. Ultimately, the gilded hyperbole of Cyberwar being peddled to the public is dangerous because it distracts us from focusing on actual threats and constructive solutions. Pay no attention to the man behind the curtain says the ball of fire named Oz. In this presentation, I’ll pull back the curtain to expose the techniques being used to manipulate us and the underlying institutional dynamics that facilitate them.

Slides (.pdf) are available as well.

(PS: yes I see the irony of posting “Cyberwar = Propaganda” on “blog.cyberwar.nl”)

In 1996, Alan Sokal gained notoriety for getting his (intentionally) bullshit paper “Transgressing the Boundaries: Toward a Transformative Hermeneutics of Quantum Gravity” published in the cultural studies journal Social Text. This has become known as the ‘Sokal affair‘. In “Fashionable Nonsense: Postmodern Intellectuals’ Abuse of Science” (1997), physicists Alan Sokal and Jean Bricmont explain why Sokal’s parody paper is bullshit and identify the (probably undesirable) conditions of (mostly French) postmodernist thinking that (probably) made it possible for the parody paper to get accepted in a journal. Excellent book. The affair demonstrated unwarranted disqualification of scientific methods as a result of overly relativistic “anything goes”-thinking and unjustified and often improper use of concepts from mathematics, physics and logic.

Questions to ask when reading/reviewing a scientific paper:

I suggest the following subquestions:

Several years ago I read the Dutch book “Wetenschap of Willekeur” (1985) by A.A. Derksen, which (still!) is an excellent introduction to the philosophy of science. Can you read Dutch? Buy a copy! 🙂 The book contains one diagram which IMHO summarizes the (?) naturalistic conception of science pretty well, and for educational purposes I reproduced and translated it: 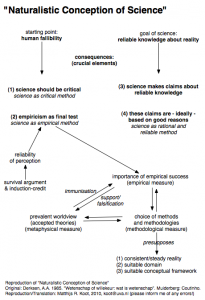 P.S.: I expect this blogpost to be covered by the Dutch right of citation (‘citaatrecht‘), please inform me if I’m wrong.