UPDATE 2012-02-16: raver1975 released a SQL database w/35M Google Profiles as .torrent on The Pirate Bay.
UPDATE 2011-06-10: Central question in the Google discussion is whether mass-aggregation of profile data by unknown third parties is considered acceptable. We should neither exaggerate NOR DENY possibilities that public profile data offers to adversaries. We should THINK about them. How will YOUR LinkedIn + Facebook + Twitter + Google Profile + (…) make you look when I combine them and subject you to longitudinal study? I seriously doubt that such activities will turn out all good and harmless.
To quote from Tali Sharot’s piece on The Optimism Bias in Time Magazine June 2011 : “The question then is, How can we remain hopeful — benefiting from the fruits of [techno-]optimism — while at the same time guarding ourselves from its pitfalls?” Like him, I too believe knowledge is key in that.

My activities are directed at feeding debate about privacy — not to create distrust but to achieve realistic trust — and on the meaning of “informed consent”. Which, when signing up for online services like Google Profile, amounts to checking a box. How can a user possibly be considered to be “informed” when they’re not made aware 1) about the fact that it does not seem to bother Google that profiles can be mass-downloaded (Dutch) and 2) about misuse value –or hopefully the lack of it– of their social data to criminals and certain types of marketeers? Does this enable mass spear phishing attacks and other types of social engineering, or is that risk negligible, e.g. because criminals use other methods of attack and/or have other, better sources of personal data? Absence of ANY protection against mass-downloading is the status quo at Google Profile. Strictly speaking I did not even violate Google policy in retrieving the profiles, because http://www.google.com/robots.txt explicitly ALLOWS indexing of Google Profiles and my code is part of a personal experimental search engine project. At the time of this writing, the robots.txt file contains:

I’m curious about whether there are any implications to the fact that it is completely trivial for a single individual to do this — possibly there aren’t. That’s something worth knowing too. I’m curious whether Google will apply some measures to protect against mass downloading of profile data, or that this is a non-issue for them too. In my opinion the misuse value of personal data on social networks ought to be elicited before publishing it under a false perception of ‘informed’ consent.

My activities were performed as part of my research on anonymity/privacy at the University of Amsterdam. I’m writing a research paper about the above. Repeating from my previous post: this blog runs at Google Blogger. I sincerely hope my account “mrkoot” and blog.cyberwar.nl will not be blocked or banned – I did not publish the database and did not violate any Google policy.

Two days ago I wrote a blogpost on the book The Cult of Statistical Significance written by Stephen T. Ziliak and Deirde N. McCloskey. It seems that the “Statement on the proprieties of Substantive Significance“(*) proposed by the authors on p.249/p.250, chapter “What to Do”, is absent from the internet (Google Books being an exception) — while it is of plenty value to be shared online. So I did some data entry. Typo’s are mine, emphasis is original.

I will add bibliography and hyperlinks to this post later this week.

Please also read the follow-up post I published on May 24th 2011. It contains a better description of the motivation, and less technical details.
— Matthijs R. Koot, 2011-06-01

UPDATE 2011-05-23 #1: I’m currently writing a paper about the topic discussed below. The activities are performed as part of my research on anonymity/privacy in the System & Network Engineering research group at the University of Amsterdam. A tweet on May 20th 2011 by Mikko Hypponen, as described here, urged me to post a bit prematurely. Google has been informed.

UPDATE 2011-05-23 #2: here is code that can convert most of the data in your Google Profile into a single SQL statement: https://cyberwar.nl/GProfile2SQL.js . When accessing a profile in a browser, the profile data (names, profession, education, …) is stored in a single multidimensional Javascript array named OZ_initdata[][][…]. Install spidermonkey for its C-based Javascript engine js, download your own profile and save it as e.g.  mrkoot.html. Then execute someting like sed -n ‘/var OZ_initData = /,/^;window/{ s/.*var OZ_initData = /var OZ_initData = /g; s/^;window.*//g; p; }’  mrkoot.html | tee tmpjs | js -f tmpjs -e ‘print(OZ_initData[5]);’ | js -f tmpjs -f GProfile2SQL.js to get an INSERT statement. Optimizations are left as an exercise to the reader; you can figure out the table structure from the Javascript code and extend everything as you wish.

====== START OF ORIGINAL BLOGPOST ======
The existence of Google’s profiles-sitemap.xml has been known outside Google since at least 2008. The XML file, last updated March 16th 2011, points to 7000+ sitemap-NNN(N).txt files that each contain 5000 hyperlinks to Google profiles; 35M links in total. Snippet from sitemap-000.txt:

Google Profile allows users to choose whether they want to use their username in the Google Profile URL to make it more easy to find and remember:

Selecting the second option gives an URL like https://profiles.google.com/USERNAME. Accessing profiles using the identifiers found in the sitemaps indeed reveals the Google username — and therefore @gmail.com address. E.g. for me w/username “mrkoot“:

Note that the HTTP 301 Redirect discloses the username before any HTML is requested. During February 2011 I checked all 35 million links –my connection did NOT get blocked after any amount of connections– and found that ~40% of the Google Profiles expose their owner’s username and hence @gmail.com address in this way. It totals to ~15 MILLION exposed usernames / @gmail.com addresses(*). With no apparent download restriction in place for connections to https://profiles.google.com and Google users disclosing their profession, employer, education, location, links to their Twitter account, Picasa photoalbums, LinkedIn accounts et cetera this seems like a large-scale spear phishing attack waiting to happen?(**) But hey, the users have been warned.

(*) I can provide proof if necessary.
(**) Pardon the alarmist tone.

UPDATE 2011-08-24: When am I going to get my money back? <– a good post on “publication count vs making impact on society” — not exactly the same topic as my post below, but also makes the case for focusing on the “oomph” factor, i.e., the “qualitative size” of results rather than on a sole metric alone.

In The Cult of Statistical Significance, economists Stephen T. Ziliak and Deirde N. McCloskey consider various empirical sciences and remind us that statistical significance, by itself, does NOT equal scientific significance (.pdf). The authors criticize the ideas of R.A Fisher and restore the ideas of W.S. Gosset in honor while explaining their point.

“X has at the .05 level a significant effect on Y, therefore X is important for explaining Y”. So what? HOW important is X is for explaining Y? How does this finding help the world DECIDE AMONG POSSIBLE COURSES OF ACTION? What is the potential IMPACT of the claimed effect, e.g. measured in units of HEALTH, MONEY and OTHER ‘HUMAN’ VALUES? How LARGE is the impact in your field of science — the clinical significance, biological significance, psycho-pharmacological significance, …? Seemingly evident questions, but the authors convincingly demonstrate, using concrete examples, that these questions are often not answered (or even asked?) in real-world scientific practice.

The authors correctly state that a finding with LESS statistical significance may have MORE scientific significance, and contend against using a rather arbitrary threshold of statistical significance, e.g. p<0.05 (why not p<0.06 or p<0.15?), as a fixed, non-negotiable demarcation of science or ‘scientific proof’. The authors assert that a minimax strategy or other loss function needs to be employed in addition to P-value, R2, Student’s t, etc. Their point is summarized in this graph (*): 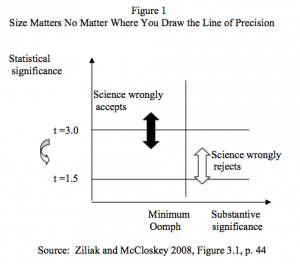 Judging by the text, it is clear that the book scratches a serious personal itch of the authors – I’d almost speculate they wrote this book as an assignment in anger management. Either how, I strongly recommend this book.

(*) This version is a screencapture from http://www.deirdremccloskey.com/docs/jsm.pdf, but it’s the same graph from the same authors.

The below is an excerpt from the United States DoD Directive 5240.06 on Counterintelligence Awareness and Reporting (CIAR) (.pdf, 2011; updated 2017; mirror) as published at www.esd.whs.mil: “All DoD personnel shall receive CIAR training in accordance with this Directive (…) within 90 days of initial assignment or employment (…) and every 12 months thereafter“. Table 3 is specifically related to cyber threats.

b. Table 2. Personnel who fail to report the contacts, activities, indicators, and behaviors in items 1 through 9 are subject to punitive action in accordance with section 2 of this enclosure. The activity in item 10 is reportable, but failure to report this activity may not alone serve as the basis for punitive action.