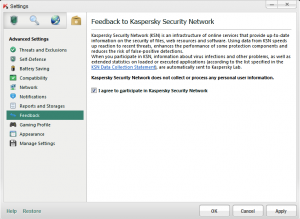 UPDATE 2022-03-15: amid the Ukraine-Russia conflict, the German Bundesamt für Sicherheit in der Informationstechnik warns over the use of software – especially if it requires high system privileges – from Russia:

“A Russian IT manufacturer can conduct offensive operations itself, be forced to attack target systems against its own will, or be spied on without its knowledge as a victim of a cyber operation, or be used as a tool for attacks against its own customers.”

Obviously this argument works both ways, i.e., Russian organizations might be advised to not run software manufactured in countries that have offensive programs against Russia. (And so on.) The thought of digital balkanization is not appealing, so let’s hope things can be sorted out w/o destroying all that nice developers/builders/etc. have created over decades.

10 thoughts on “By default, Kaspersky [and other] anti-virus collects LOTS of data about your system”