On October 28th, the third Cyber Security Assessment Netherlands (CSAN-3) was published(.pdf, in English) by the Dutch National Cyber Security Center. These are the core findings of CSAN-3:

In conclusion, a) dependence on IT by individuals, organisations, chains and society as a whole has grown; b) the number of threats aimed at governments and private organisations has risen, mainly originating from states and professional criminals; and c) digital resilience has remained more or less at the same level. Although more initiatives and measures are being taken, they are not always in step with the vulnerabilities, and basic security measures have not always been put in place.

Table 1 gives insight into the threats that various actors use to launch attacks on governments, private organisations, and citizens.  […] 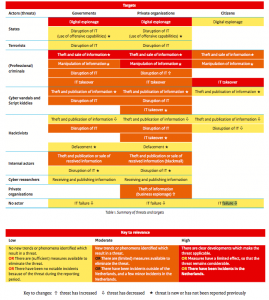