UPDATE 2017-08-17: another incident occurred today at the NPO headquarters in Hilversum. A man took a hostage and was arrested after a peaceful resolve of the hostage situation. It is said to concern a confused man, speaking poor Dutch, and reportedly told police he wanted to speak to a (any?) CNN reporter. (CNN has no physical presence in Hilversum.)

UPDATE 2015-01-29 22:30 UTC+1: it is suggested the attacker is 19-year old Tarik Z. from the town of Pijnacker; freshmen student of chemistry at TU Delft; not listed among known jihadists; NOS anchor is quoted as saying: “confused loner, student who lost parents [EDIT: last week], not a terror-motive”.

UPDATE 2015-01-29 22:05 UTC+1: Attacker seems to suggest affiliation with a hacker collective, claims they were hired by intelligence services. Claims they have seen things that they want to bring to light. It is unclear whether there’s any truth to his claims. The building is now cleared.

A little before 20:00 UTC+1, at which the eight o’clock national TV news starts broadcasting, an armed gunman [EDIT: allegedly Tarik Z. from the Dutch town Pijnacker] entered the building of Dutch broadcasting organization NOS, located at the Media Park in Hilversum, and demanded air time. He has been arrested, and nobody got hurt. Nothing was broadcasted live, but the arrest was recorded by rolling cameras. A photo appeared on Twitter showing a letter the man handed to NOS reporter Martijn Bink. Here is a translation of that text (the second paragraph seems to be text that the gunman wanted the presenter to tell live on television):

When you read this, do not panic. Do not scream and do not warn your colleagues. Act as if nothing is happening. I am heavily armed. If you cooperate, nothing will happen to you. Be aware that I am not acting alone. There are five other and 98 hackers who are ready to carry out a cyber attack. Moreover, eight heavy explosives have been placed in this country that contain radioactive material. If you do not bring me to studio 8 to take over the live broadcast, we are necessitated to act. You do not want to be responsible for that, right? So bring me to studio 8 now, the NOS studio.

We have been taken hostage by heavily armed men [added in handwriting: in studio 8, Media Park Hilversum]. More of them are present in the rest of the country and they have 98 hackers ready to carry out a cyber attack. Also, eight heavy explosives have been placed throughout the country, that contain radioactive material. They want to carry out a live broadcast to tell their story. From the outside it is monitored whether the broadcast can be viewed throughout the Netherlands. Their demands are therefore, among others, 1. This building will not be assaulted. 2. The live broadcast will not be delayed, not interrupted for one second, and not edited. 3. To be clear, no information and no subtitles will be added to the live broadcast. If these demands are met, we will be released. I will repeat this. [repeat]

It is currently [Jan 29th 22:49 CET] unclear to what extent the statements are true or false, and even whether the gun was real or not.

A video fragment is available of the attack, and the gunman, after reportedly having self-identified as belonging to a hacker collective, is saying:

[…inaudible…] will be said, that are very great world affairs. We were, say, hired by intelligence services, and there we saw things that cast doubt on current society. We will now bring those things to light.

Allegedly, NOS personnel was forbidden, via an internal email, to tweet about the affair, or bring information out in any way.

Here is a copy of the video still of the gunman published at http://www.nu.nl/binnenland/3982448/gewapende-man-zendtijd-eist-opgepakt-in-nos-pand.html : 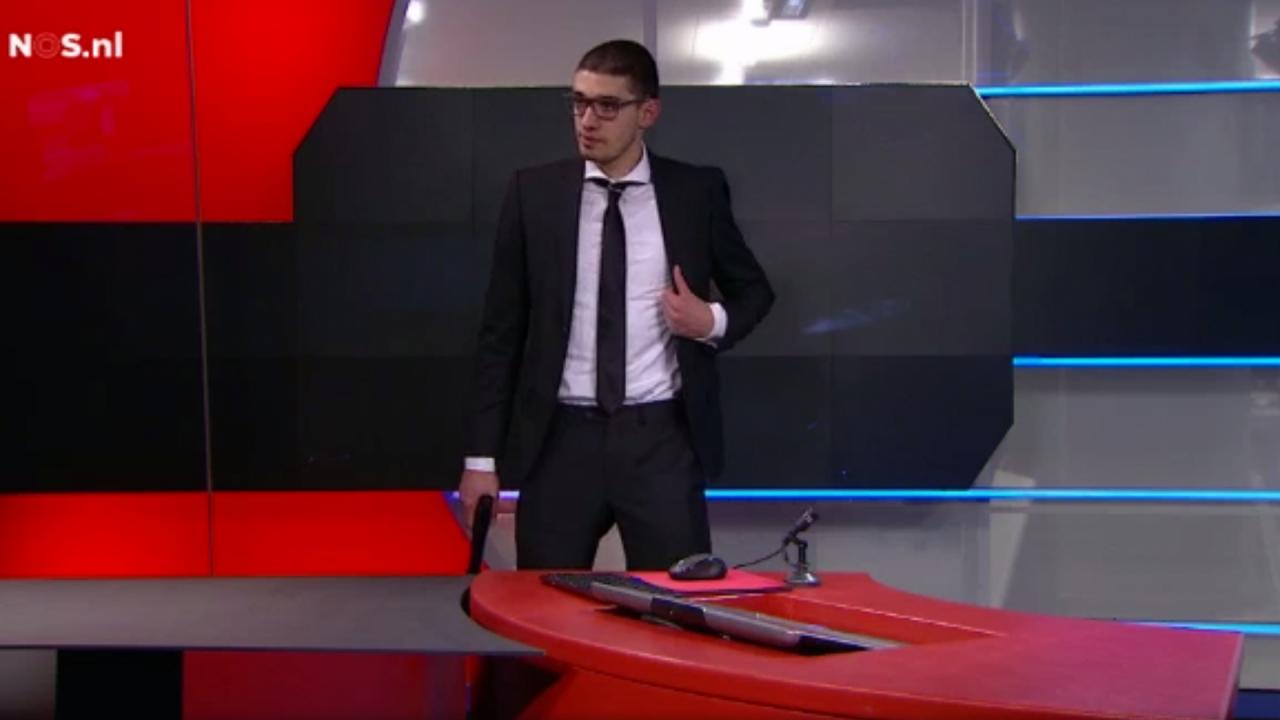 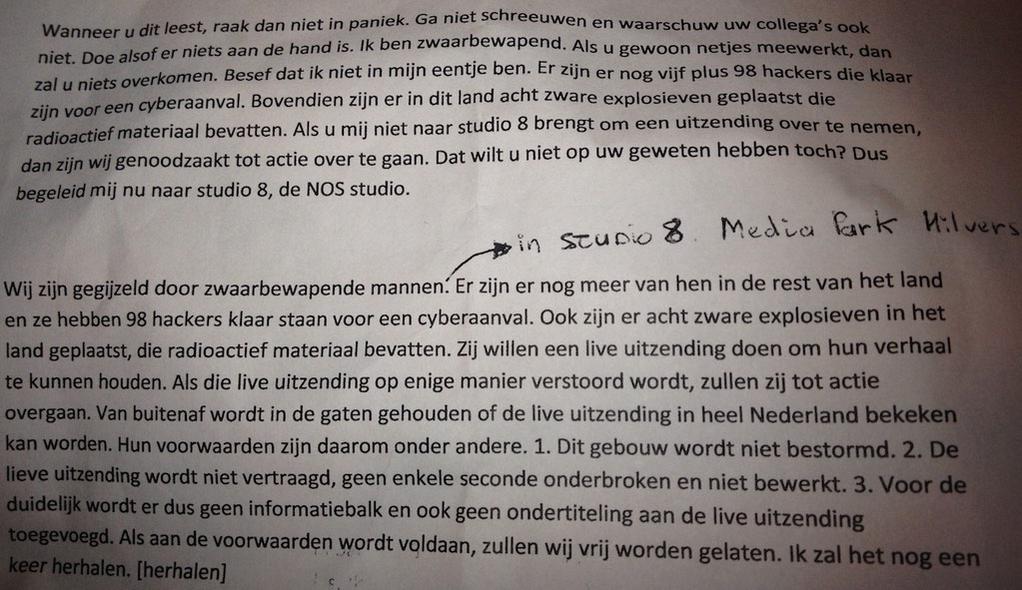