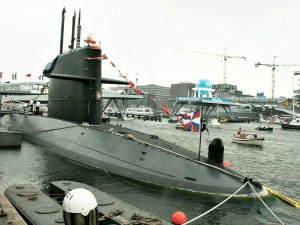 Dutch news agency NOS reports (Nov 4) that the Dutch Minister of Defense, Jeanine Hennis, expressed the intent to replace the four Walrus-class submarines operated by the Royal Netherlands Navy by 2025. Hennis thereby confirmed statements made in 2013. The replacement concerns the S802 Walrus,  S803 Zeeleeuw, S808 Dolfijn and S810 Bruinvis submarines that have been in use by the Dutch navy since the 90s. Translation of the report by NOS:

The Ministry of Defense want to acquire new submarines. Early 2015, Minister Hennis will suggest a plan for succession of the current navy submarines, possibly in cooperation with Norway and Germany.

The Royal Netherlands Navy now has four submarines of the Walrus-class.. These are in use since 1990 and must be replaced in 2025. They are used, among others, for anti-piracy missions around Somalia.

Hennis wants to suggest a robus plan, because “the last that the Ministry of Defense needs is another program like the Joint Strike Fighter”.

As stated on the MoD’s website, the submarines are tasked with reconnaissance, collecting intelligence, conducting coast reconnaissance, laying sea mines and putting special forces from the Netherlands Marine Corps ashore.

So the costs associated with replacement appear to be estimated at some 5 x 500M euro = 2.5 billion euro.

In June 2015, the Dutch cabinet released its vision (in Dutch) on the future of the submarine service. Page 11 contains a table that shows the present international cooperation concerning submarines. Here is a translation of that table: 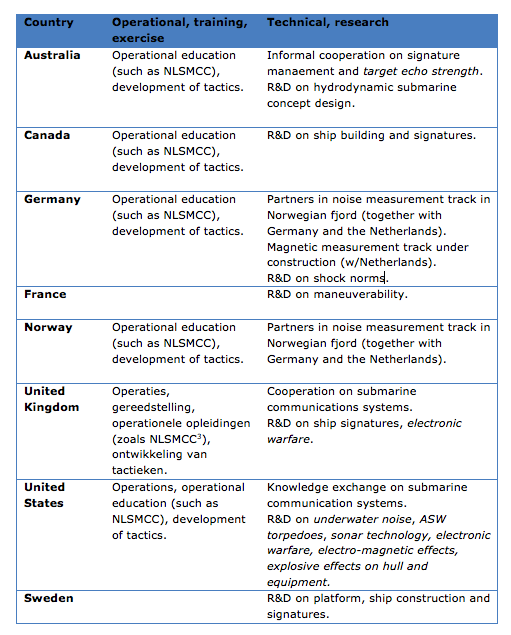 UPDATES (from new to old)

UPDATE 2017-07-20: the new four-party coalition government decided on a new minister of defense: Ank Bijleveld. The coalition agreement 2017-2021 (.pdf) does not specifically mention submarines, but does mention that “necessary investments in replacing and modernizing material will be sustainably financed”. Furthermore: “In Europe, the Netherlands will insist on a level playing field. This creates room for European production, trade and innovative industry. Regarding investment bids, the Netherlands will, for economical and national security reasons, reserve the right to a broad interpretation of Article 346 of the Treaty on the Functioning of the European Union of 2007.” (links added by me).

UPDATE 2017-07-04: NOS reports that the Dutch House of Representatives agreed that the Dutch minister of defense, Jeanine Hennis, can proceed with the replacement of submarines.

UPDATE 2017-06-17: new book on Dutch submarine espionage in 1968-1991 Cold War era reportedly (in Dutch) reveals some secrets: “In het diepste geheim“, by independent Dutch navy journalist Jaime Karremann of Marineschepen.nl (Twitter: @marineschepen), is scheduled to be released on June 21st — notably while attempts to form a new Dutch government following the 2017 national elections are still ongoing. The new government, whatever it will look like, will have to agree on government spending for the next years, and that includes the amount of funding made available for the replacement of submarines.

UPDATE 2016-08-09: the name of the MoD project for replacing the submarines is “Vervanging onderzeebootcapaciteit” (VOZBT). (source)

UPDATE 2016-06-17: according to a news report on the Dutch MoD website, Jeanine Hennis, the Dutch Minister of Defense, has stated that the military-functional requirements that will apply to the submarine procurement/selection process will be as follows (note: the following is my translation from Dutch): “deterrence power, and large and precise maritime battle power to protect, among others, surface ships, and thereby provide capabilities for strategic influencing, the power to influence opponent actions through relatively modest use of military power”. Furthermore, the submarines must be able to “gather, analyse and share intelligence” on a global basis, and be able to be used as “a base for special operations”. The Netherlands “hopes to involve Australia, Germany, Norway and Sweden in the replacement process”. Until mid-2018, an investigation is ongoing to determine to what extent the requirements can be met.

UPDATE 2015-06-11: the Dutch cabinet published a vision (in Dutch) on the future of the submarine service. I appended a translation of the table showing international cooperation concerning submarines (from page 11) to the post below.