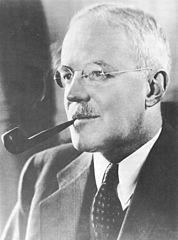 The Fall 2009 issue of AFIO‘s The Intelligencer contains an article by James Srodes on (declassified) notes attributed to American diplomat and lawyer Allen Dulles (1893-1969), the 5th Director of Central Intelligence and once head of the CIA. The notes are entitled “Some Elements of Intelligence Work”; the title of Srodes’s article is “Allen Dulles’s 73 Rules of Spycraft”. According to Srodes, Dulles’s writing is “unpolished and almost conversational in style, as if Dulles had simply noted them down as the basis for one of the informal lectures he continued to give to young training officers”. The elements “range from the tiny tasks of tradecraft to the broader philosophy of security, recruiting agents, and personal discipline”, and “[Dulles’s] precepts hardly seem dated even now”.

In 2010, Robert David Steele uploaded a scanned copy (.pdf) of Srodes’s article (mirror). OCR doesn’t work well on this copy, but fortunately The Grugq already has a text file of the 73 elements. Because LOCKSS, I keep a copy of that text here. A possible further read is this 8-part blog series on the elements, written from a (self-proclaimed layman’s) U.S. patriotic perspective.

“The greatest weapon a man or woman can bring to this type of work in which we are engaged is his or her hard common sense. The following notes aim at being a little common sense and applied form. Simple common sense crystallized by a certain amount of experience into a number of rules and suggestions.

PS. The above points are not intended for any cursory, even interested, glance. They will bear — each of them — serious attention, and at least occasional re-perusal. It is probable, furthermore, that dotted here and there among them will be found claims that have particular present application for each person who reads them. These, naturally, are meant to be acted upon straightaway.”